Now that I am once again in possession of the Laser I used to sail in high school (134628) I am looking at purchasing the updated rigging. There appear to be a few options and so I'd like some feedback from readers on the pros and cons of the different set-ups. First up are the choices for the vang. 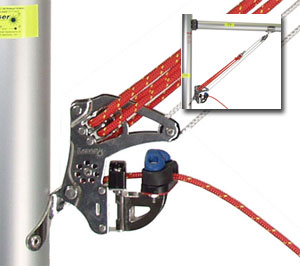 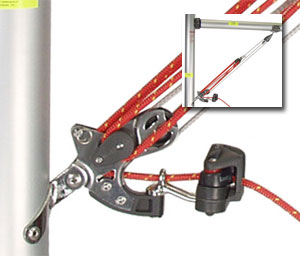 Posted by Litoralis at 9:15 AM 5 comments: Links to this post

Out of curiosity I did a quick worldwide patent search to see if anyone had patented any interesting hiking bench designs. There wasn't much out there, but I did find a 1998 PCT application from Harken Italy that disclosed a really fancy hiking bench. 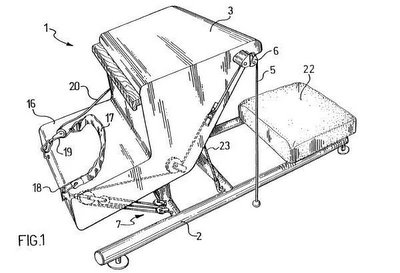 The PCT application has been designated for regional patents in a bunch of countries, notably the US, New Zealand, Australia and the UK. It has only issued as an actual patent in Australia but it has entered the examination process in the US. Here's an excerpt from the description of the invention:

As shown in Figures 2 and 4, this equipment 1 also includes sense means 8 for measuring the pulling effort exerted on the first rope 5 by the trainee. These sense means 8 are connected, through one 7a of the blocks 7, to the first rope 5, and by electric cables 11 to a processing unit 12.

The processing unit 12 contains processing means 9 adapted for processing the force signal from the sense means 8, to compute a numerical value for the torque applied to the seat by the trainee. These processing means 9 are connected electrically to indicator means 10 which show the processed numerical value on a display. The visual indicator means 10 may be complemented or replaced by sound means, such as a horn or alarm which would emit a tone upon a given value of the measured quantity being reached. In a more elaborate modification, not shown, the processing means could be a computer complete with a display screen, in addition to or instead of the indicator means; in this modification, the computer could be utilized to display more sophisticated information, such as diagrams, graphs, etc..

The seat 3 has in cross-section, taken on a perpendicular plane to the pivot pin 4, substantially the shape of a portion of a transverse section of a sailboat, in the example shown, of a Laser Class sailing dinghy. Means are provided on the seat 3 for holding down the feet of the trainee accommodated on the seat 3 with his feet resting on a flat surface 16. These means comprise a footstrap 17 secured with one end to the seat 3 by a snap shackle 18, and connected with the other end to a second rope 20 led by a further block 19 to a second jam cleat 21 (Figure 1).

I think the most interesting feature is the adjustable angle of the seat. I can do without the torque sensor that measures the sailor's hiking force and the sensor to measure the force on the mainsheet although it would be interesting to see how much force a sailor can generate when hiking.

There is also an expired US patent from the 1970's on a very elaborate sailing simulator from a Japanese company. 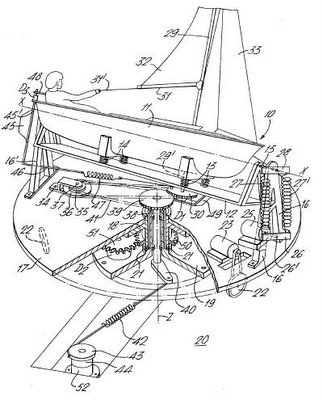 There's no way that I am going to build anything like that.
Posted by Litoralis at 2:03 PM 21 comments: Links to this post

I was just thinking about building a hiking bench this morning before reading Tillerman's post about dragging his bench out to start working out. I looked around for plans on Google for a while with no great success. Oh sure, there are some commercially made kits that seem to be based on Dick Tillman's design in his book "Laser Sailing for the '90's" and there is even a folding version designed by Nick Livingston, a Laser sailor in the UK, but I think it would be interesting to use some of my rusty engineering skills to design my own. I should be able to take the basic measurements from Nick Livingston's design and then come up with my own design...it'll have to be pretty sturdy so I might make it modular so that I can disassemble it to put it away. When the plans are done I will post them here.
Posted by Litoralis at 9:37 AM 7 comments: Links to this post

This video has been featured on a couple of other sailing blogs (Wetass Chronicles and Eli Boat) but I really enjoyed watching it and thought I'd post it here too. Even though the 470 is now being overshadowed by the new skiff classes the video shows how much fun it can be to sail a double handed dinghy. The music gives it the feel of a high school graduation slide show but there are some great shots of high speed reaches and some really good overhead shots of tacks that show the timing and teamwork that goes into sailing one of these boats.

When I was working at the St. Croix Yacht Club as a sailing instructor I met Chris, Scott and Peter Stanton who were local kids with some great sailing talent. Their family was originally from the Jersey shore and the boys regularly cleaned up on the Caribbean J24 circuit in their boat Jersey Devil. While I was teaching at the yacht club, Scott and Peter had managed to find an old 470 that was so soft that you could watch it flex over every wave. The boys were only about 14 years old, but they were incredible sailors. I remember that the boys travelled to regattas in Miami and did acceptably well considering the condition of their boat. Scott Stanton now sails for Texas A&M and Peter sails for Eckerd College. Peter was third (with older brother Chris Stanton as crew) in the 470 at the 1999 Miami OCR and is registered for the 2006 Miami OCR. If I have time I'll follow his results in Miami and post them here.
Posted by Litoralis at 8:56 PM 2 comments: Links to this post

Thanks to Tim Zimmerman at The Wet Ass Chronicles for pointing me to some amazing photos of Key West Race Week. It has been windy enough even for the big boats to get going fast...too bad you need to find at least half a dozen other people and $100,000 to sail them. 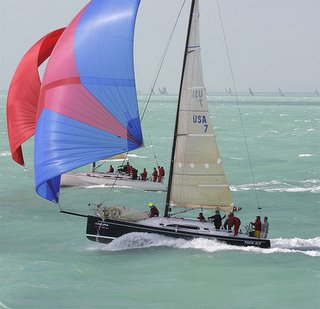 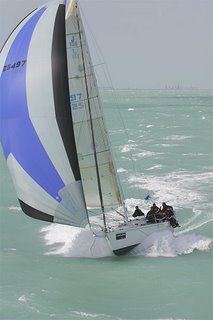 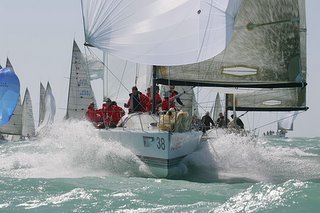 Last summer I sailed on a Star. The nice thing about sailing a Star at the club/regional level is that the boat is not that physically demanding. Some Star sailors might disagree, but it just doesn't take that much effort as a crew to trim the tiny jib, adjust the backstays and droop hike, compared to sailing in smaller dinghies. Sure, the stakes are a bit higher in a Star; if you screw up a gybe in a dinghy you might lose a few places in the race...in a Star, if you forget to cleat the new windward backstay as you cross the boat then the mast will go over the bow. In the Star, I had plenty of strength and enough coordination to do everything I needed to do. It would have been nice to be able to lift myself out of a droop hiking position without using the deck handle (OK...grabbing the backstay) but hiking itself doesn't take much effort in a droop harness. Being a big Star crew was fun, but I need to get back to driving a boat and my most likely ride is a Laser.
To sail a Laser properly again I will need to gain alot of endurance and lose alot of weight. So to this end I joined a gym that is around the corner from my office. To start off with I am planning to do at least 30 minutes of some sort of cardiovascular exercise 4 times per week(either on the machines at the gym or running outdoors when the weather gets nicer). I am also going to do some basic circuit training using the weight machines at the gym initially and then adding more free weights into the routine as I become more comfortable with weight training again. As the routine develops I will post details here. In addition, I am going to build up some sort of core strength routine to build abdominal and back strength. I have a meeting with a personal trainer next week, so I will ask him more about what I should do then.
Please add comments with any tips or suggestions.
Posted by Litoralis at 11:35 AM 6 comments: Links to this post

The Boston Buoy is a 3-meter discus buoy located 16 NM east of Boston, MA. Today it was very windy in New England and the buoy was measuring an average wind speed of 25.3 kts with 8.2 ft waves that were only about 5 seconds apart (the buoy site describes this as "VERY STEEP"). The highest wind gust today was 40.8 kts. And, on top of the already hairy conditions there is a warning to keep speeds under 12 kts because Right whales are active in the area!
Posted by Litoralis at 5:19 PM No comments: Links to this post 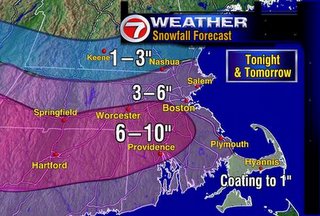 There is snow in the forecast for the northeastern US tonight, so here's a link to a really good Shockwave skiing game to get you in the mood: Ski Run

The game is very realistic; you really have to stay ahead of the gates by turning early just like in real life.

A long time ago I used to ski alot, so occasionally during the winter Litoralis might turn into Montaneus and contain posts about skiing and snow instead of sailing and water. At some point I should really do one of the Ski/Sail regattas. They look like fun events...from the website: "Every sailor must ski and every skier must sail, and every sailor must party".
Posted by Litoralis at 5:30 PM 2 comments: Links to this post