A while ago I wrote about my past experiences with sail stripes. It seems like sail stripes are getting more and more inventive these days. From Alinghi's new windsurfer-like main with red stripes and contrasting white stripes which I assume are still designed to aid in digitizing the sail shape: 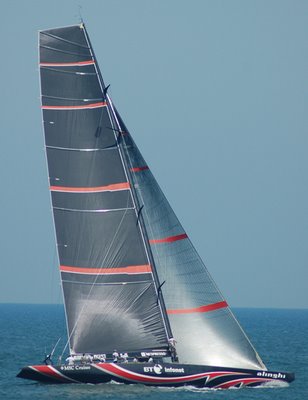 to a boat called Onyx from Switzerland, which is sponsored by a printing company that specializes in extra large printing. 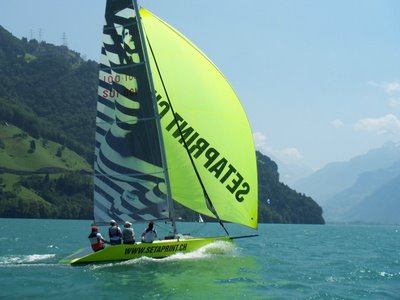 Very different usage of stripes!
Posted by Litoralis at 9:25 AM 2 comments: Links to this post

LiveSailDie has posted a thread in their forums asking people to post a photo of where they sail. Like Tillerman, I don't really have a home club, I sail wherever the sailing is at. I do sail Stars out of Cottage Park Yacht Club in Winthrop, MA. Here are two satellite pictures: 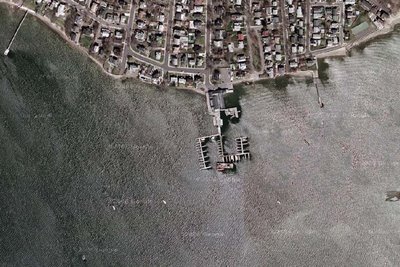 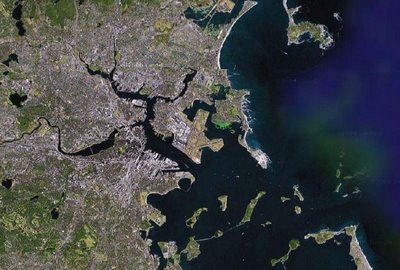 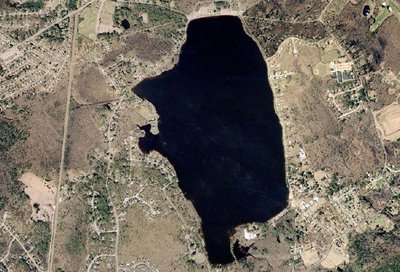 Posted by Litoralis at 1:42 PM No comments: Links to this post

I found this story on the internet and it appears that the company has tested their system and it works. There is some kind of automated mechanical system that keeps the kite flying but it looks like it still has some issues (see video below) because the kite weaves around quite a bit. 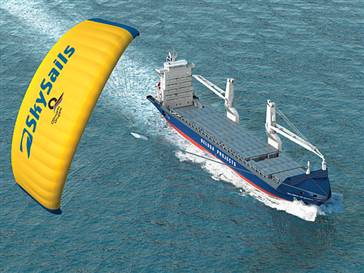 A German company is introducing sails it says may help propel ships across the sea cheaper and faster than modern engines. SkySails' system consists of an enormous towing kite and navigation software that can map the best route between two points for maximum wind efficiency. In development for more than four years, the system costs from roughly $380,000 to $3.2 million, depending on the size of the ship it's pulling. SkySails claims it will save one third of fuel costs. It recently signed its first contract with Beluga Shipping of Bremen, Germany, for one kite, but says it expects to sell 300 more within five years. Beluga says that the giant kite will help the company meet environmental regulations as well as cut fuel costs.

The sail systems are meant as a retrofit technology that can work with any cargo ship as well as yachts of more than 79 feet. Ships can use their engines to begin and end voyages and use sail power in lieu of engines for the middle portion. Use both, and you go even faster. 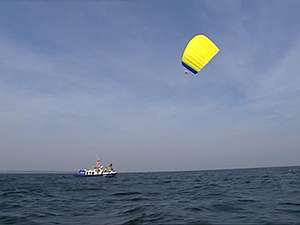 And a link to a video.

Posted by Litoralis at 12:59 PM 3 comments: Links to this post

Tryin' to Reason with Hurricane Season

A big thunderstorm hit the north shore of Boston yesterday. The Flying Scot fleet in Marblehead at the Corinthian Yacht Club for their North Americans was caught by the storm and many boats were damaged. There were 3 inch hailstones! Here's a link to a video with some images of the damage at the yacht club (about 30 seconds into the video).

Scots on the the dock, such as 34 in the photograph above, were flipped 8 to ten feet in the air, with results like those seen in the photo. Out of 63 Scots a conservative count would say 30 of those boats were turtled, with damage to many more. Fortunately, all Scot sailors and Corinthian people were injury free. The damage to Flying Scots and other boats in the harbor is severe and is being assessed. The Corinthian staff have dedicated their efforts to making their waterfront operational, along with supporting the Scotter's retrieval efforts admirably.
Posted by Litoralis at 9:38 AM 3 comments: Links to this post

Does anyone know what's going on in Arizona? Carol Anne are you O.K.? 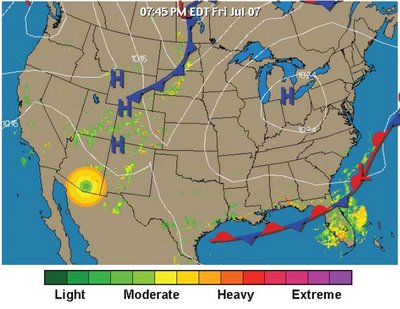 Posted by Litoralis at 8:23 PM 3 comments: Links to this post

If I Could Just Get It On Paper

"The rumors of my death have been greatly exaggerated"
- Mark Twain
The weekend after my previous post I sailed Stars on Saturday and then Lasers on Sunday at the local lake. The wind on Saturday was supposed to have been about 10 knots, so it seemed to be a perfect day for our first practice and club race of the season. The 10 knot forecast was true up until we rounded the first windward mark in second place. Then the breeze suddenly built to about 20 knots and we were planing downwind with the mast forward and the jib poled out to windward.
For those of you who have not had the pleasure of crewing on a Star, I must explain that sitting on the foredeck with your legs around the mast watching the mast tip above you flex foward of the bow while 1500lbs of keelboat planes downwind is quite an experience. Jibing in a Star requires a whirlwind of activity in any conditions, but when the breeze is on it all happens much faster: jump back in the cockpit, pull in the leeward backstay as the skipper bears away sheets in the main, make sure the leeward (new windward) backstay is cleated in the right location for the wind conditions as the stern goes through the wind, duck under the boom as it swings six inches above the deck, uncleat the old backstay to allow the boom to go out, jump back up on the foredeck to jibe the pole, and then check the rig to make sure it looks OK.
We managed to survive the day without any breakages but decided to drop out of the last race as a result of the skipper fouling 3/4 of the fleet on the first beat.
On Sunday it was still really windy and so I headed over to the local lake with my Laser. I was able to show the locals what a 240lb Star crew can do going upwind in 20 knots in a Laser. They could slowly reel me in on the downwind legs of the windward-leeward course, but upwind I was fully powered up while they were struggling to keep upright. I had a very good day of sailing within 10 minutes of home, not bad.

On the next Sunday, I returned to the local lake with Tillerman. The conditions were much calmer, and Tillerman gave the local fleet, including me, a masterclass in medium-breeze lake sailing. I was definitely not "in the zone" and consistently forgot about the persistent rightie shift at the top of every beat.

Last Saturday I went to my second Laser regatta of the season (the first was Tillerman's Collander Cup) and the first Laser regatta in more than ten years on the sea. The regatta was sailed out of the Bass River Yacht Club in South Yarmouth, MA. I was wary of driving down to Cape Cod on a holiday weekend, but the weather forecast was exceptional so I decided to risk it. There was no traffic on the way down and I made it to the club by 8:30am. The club is a small, casual place on the Bass River; a small tidal river just wide enough for a navigation channel. When I arrived most of the boats were already rigged, so I hurriedly put the boat together and waited for the skipper's meeting. Most of the other sailors were either juniors/college kids or Masters (35+). I was the only 20-something to be seen.
The date of the regatta was chosen for the favorable tides, so we sailed out of the river, with the tide, into Nantucket Sound. On shore, some of the younger sailors had changed out of their hiking pants into boardshorts because the wind seemed to be light at the club. However, when we reached the open water of the Sound the wind was blowing on-shore at a steady 15-20 knots. The race comittee was already about a mile offshore, so getting to the starting area gave me an opportunity to get used to sailing upwind in waves again. The first race was a windward/leeward, once around. I started conservatively in the middle of the line and headed out to the left of the course. There was a strong current heading downwind evenly across the course, so even though the windward mark seemed close the beat was probably the equivalent of a 3/4 of a mile. I found that my weight allowed me to sail the boat much more powered up than most of the rest of the fleet and so I was able to point higher by sailing the boat flatter with more power in the sail than the other boats. At the windward mark I was in third and was able to hold my position on the downwind leg. On the second upwind leg to the finish I was holding my own, but when I tacked on the layline to the pin end of the finish line I caught my PFD on the boom and capsized. I was able to get the boat up quickly and ended up seventh.
The second race was more of the same without the capsize, so I actually did end up with a third. I tried for a pin end start in the third race, misjudged the current and had to gybe around and start behind the fleet. I managed to catch up with the leaders but the wind had died down a bit and so the race ended up to be my throwout.
The last two races were my best of the day. The wind picked up to 25-30 and the waves got bigger. I was first at the windward mark in both races and then lost boats downwind again. I was getting better at surfing the waves going dead downwind and picking low spots in the waves ahead to make gains, but my weight was slowing me down compared to the rest of the fleet. Luckily, because of the current, the downwind legs were alot shorter than the upwind and so I was able to gain back most of the places I lost. Upwind I was still pointing higher and going faster than the other boats and by this time the waves were big enough to make some body torquing necessary just to stop the bow from digging into the waves. I ended up second in both races and then had a great screaming broad reach back to the river where the current was now heading upstream, making the trip back to the club easy.
The top three in the regatta were within 1 point of each other with throwouts and tiebreakers deciding the trophy order. I ended up fourth and was the first non-Master; the top three were all local Master's sailors.

If I could tell half of the stories
The funny way most things begin
Figure ways to disguise all the half truths and lies
Find the heart of my song with the point of a pen
Simple words can become clever phrases
And chapters could turn into books
Yes if I could just get it on paper
But it's harder than it ever looks." - Jimmy Buffett
Posted by Litoralis at 4:39 PM 6 comments: Links to this post