I spent most of the last two weeks looking forward to it.

Tillerman helped me install a new hiking strap to be ready for it.

When I saw the weather forecasts I got even more excited about it.

I bought a new spray top to be ready for it.

I packed up the car and took the tarp off the boat the night before to get ready for it.

I emailed the organizers begging them not to cancel it.

I got up early, switched baby seats between cars and hooked up the trailer so I could get there early for it.

But in the end they cancelled it because it was too windy.

I could have been doing this: 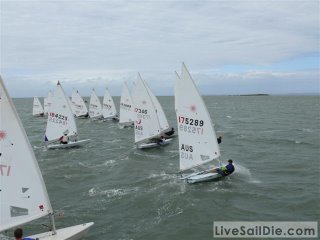 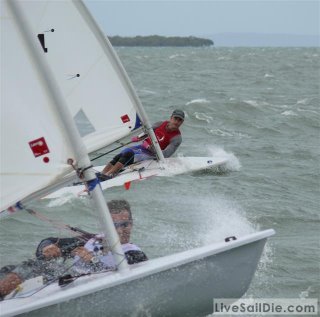 Hopefully some of this: 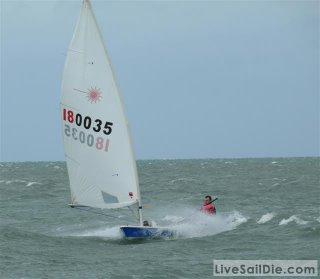 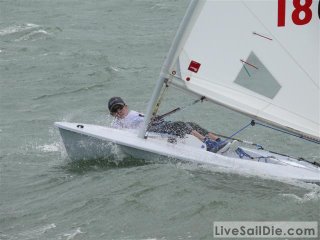 And probably a lot of this: 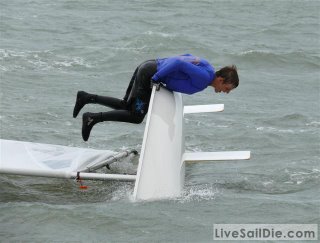 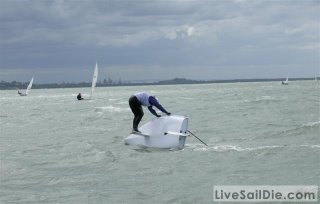 But instead I unhooked the trailer from the car, put the tarp back on the boat until next weekend and went for a run instead.
Posted by Litoralis at 11:04 AM 4 comments: Links to this post

Sailing Video of the Day - Extreme 505

Courtesy of LiveSailDie.com
Posted by Litoralis at 1:01 PM 2 comments: Links to this post


A video of a production foiling Moth, the KA Bladerider.
Posted by Litoralis at 10:28 PM 1 comment: Links to this post

Sailing Video of the Day - Cherubs


Some excellent video of Cherubs racing on a very windy day.
Posted by Litoralis at 12:17 PM 1 comment: Links to this post


A great video from Ronstan of some of their best footage of 18 foot skiffs.
Includes a skiff being run over by a ferry, and some amazing wipeouts.
Posted by Litoralis at 9:19 AM 1 comment: Links to this post


Posted by Litoralis at 9:54 AM 2 comments: Links to this post

Is this the best Laser sailing video on the web?
Posted by Litoralis at 11:59 AM 4 comments: Links to this post

Sailing Video of the Day - Streetsailing

Looks like this would be a fun thing to do when the water turns solid up here in the Northeast.
Posted by Litoralis at 9:50 AM 1 comment: Links to this post

Cheat the Nursing Home...Die on Your Sunfish

Tillerman has a sticker on his trailer that says, "Cheat the nursing home, die on your LASER!" Well, it seems that David Thompson of Bridgton, Maine has unfortunately achieved this dubious goal, albeit on a Sunfish at the ongoing Sunfish World Championships.

What was supposed to be a festive gathering for sailors at the end of the second day of racing at the Sunfish World Championships became a memorial of sorts, a race official said. One of their competitors had died.

The race started Tuesday about 2:35 p.m. near Castle Pinckney in the south channel of Charleston Harbor.

Within less than a minute, sailor David Thompson, 55, of Bridgton, Maine, collapsed and fell into the harbor, race spokesman Dan Dickison said.

Another sailor, Andres Cano-Alva of Peru, jumped into the water and tried to keep Thompson's head above water, Dickison said. A female judge for the competition also entered the water to assist.

A U.S. Coast Guard boat soon arrived and took Thompson to a nearby marina, where he was met by emergency medical workers and transported to East Cooper Hospital.

Thompson was pronounced dead at the hospital at 3:38 p.m., Charleston County Deputy Coroner Judy Koelpin said. She said the cause of death is under investigation.

"He had a series of medical issues that he had been dealing with in the last couple of years," Dickison said.

Dave also has a website that has some photos of him sailing and an interview where he discusses why he sails. His answer is particularly poignant:

Dave: That’s like asking, “Why do you breathe?” “Why do horses gallop across their paddocks?” “Why do dolphins surf bow waves?” Every answer I can think of is inadequate. I know that I can become a master sailor, but never master sailing. The challenges are endless and fascinating. Every sail is different and never what you expected. To sail well, you need a “seat of the pants” understanding of the physics involved that transcends mere numbers and formulas. It is not enough to know which course is probably best, or have a feel for what the wind will do next. It is not enough to out think your competitors and choose the right tactics. You must dance with wind and wave, hull and sail until the magical moment when everything is balanced just so and the boat starts to hum and then virtually leaps from the water and flies. Freedom. Undiluted joy. That’s the secret that sailors share and probably why we can never get enough of it. 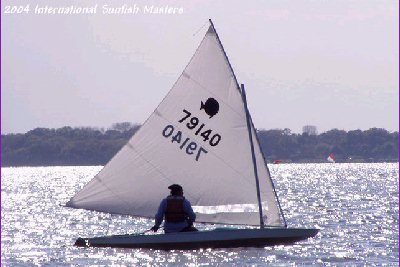 Posted by Litoralis at 3:23 PM 2 comments: Links to this post

Horton and Nichol Lead after Day 3

Here's another report from the Star Worlds by Andy Horton and Brad Nichol:

San Francisco gave everyone a "head fake" on Day 3 of the Star World Championship. With a forecast for little to no wind we were once again postponed ashore for an hour. After a slow tow down to the racecourse and lunch on a glassy bay, the forecast seemed right on target. But a break in the cloud cover beyond the Golden Gate fooled the weatherman, and the breeze came on quickly, building from zero to twelve knots in just a few minutes. We were quick to make adjustments to our setup transitioning from light to medium air and got down to business.

Again, it took three tries to get a race off and we had good start all three times in the middle of the line. With the Z-Flag flying on the last attempt, a number of the top competitors pushed the leeward end of the line too hard and saw their OCS numbers posted at the weather mark. We held our course off the line until most of the fleet cleared away and had plenty of good open lanes as we worked our way to the top of the course. We rounded the first mark in second place behind Mark Reynolds, with the Italian and German teams hot on our heals.

Down wind we decided to sail a higher course than Reynolds for more wind and when we got to the bottom we were dead even. Rather then splitting with Reynolds through the gate we felt confident in our boat speed and chose to follow him around and battle it out upwind.

Old School vs. New School; Reynolds had the advantage up the course but after a few well-timed tacks we arrived at the top of the course ahead of him. Meanwhile, Marc Pickel, the German, was free to sail alone and passed us both.

Down the second run we gained a few boat lengths and were even with the Germans at the bottom, but this time we split with them to sail in clear water on the right side of the course. We made good gains working the boat and with a few good shifts we took the gun with a solid lead over both the Germans and Mark Reynolds.

While today's win puts us in first place three points ahead of Rohan Lord (NZL), and seven ahead of Flavio Marazzi (SUI) but a lot can happen in three races. Tomorrow will prove to be a challenging day with a forecast for rain and a southeasterly gradient.

We will try to get some pictures up on the web site Wednesday shot by wonder-host Donna Wotton and if you get the Valley News in NH or VT check out the sports section Wednesday.

Tip of the Day: Don't get caught up in a battle when you are trying to win the war. Sometimes it feels good to be able to pass the boat next to you but if you focus on one boat, you can let a dozen pass you while you battle it out. It is better to work together with the boats around you so everyone goes fast!

News from the Star Worlds

Although the story below is from the Sailing Anarchy frontpage, I thought I'd post it here because it has a really good description of tactics for shifty breeze. Andy Horton and Brad Nichol are two young hotshots in the class. I had the opportunity to get beaten by them in the Sunapee Open last year. Their website has some of the best photos of Star sailing I have seen. Here are some examples:

Here's their report from the first day of the Worlds:

It is nice when your hard work and preparation starts to come together. After a week of training, long days for our coach measuring the currents on San Fran Bay, and months of planning we kicked off Day 1 of the Star World Championships with a solid second place finish. There is still a long list of things to improve upon and we still have our debrief before bed, but we are off to a good start.

After being postponed for 90 minutes due to no wind, the first start gun sounded just after 1:30pm. The westerly breeze proved very shifty all afternoon, ranging from as much as 13 knots to as little as 5, with the wind strength varied all over the course. We sailed a course with two mile long legs up and down the bay for a total of ten and a half miles over three hours.

Our plan was to start in the middle of the line where we would not be forced over the line early and sail up the middle playing the shifts. This conservative approach does not win races but if executed well will get you in the top ten as someone will always pass you on the corners of the course. We played the shifts like good lake sailors and hedged towards the favored side of the course. With good boat speed and concentration during the light tricky phases we managed to round the first weather mark in third place.

We played the puffs and concentrated on boat speed through the middle of the course on the first leeward leg which again proved to be a good conservative choice. We rounded the gate in second place and were able to hold the position through the remainder of the race.

The light wind is unusual for San Francisco but we think it will prevail for the next few days before the weather pattern changes and brings the strong winds everyone expects. We have one race scheduled to start at noon tomorrow. We will keep you posted on how it goes!

Tip of the Day: Start at the favored end of the line in big fleets. Today the start line was nearly a mile long with 80 boats. In the first general recall, the pin was 10-15 degrees favored. The boat at the pin, Andy MacDonald, was able to start and tack onto port crossing the whole fleet by 20 boat lengths!