How NOT to Lift a Boat 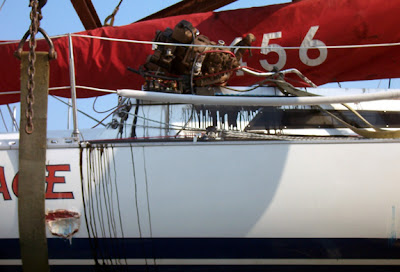 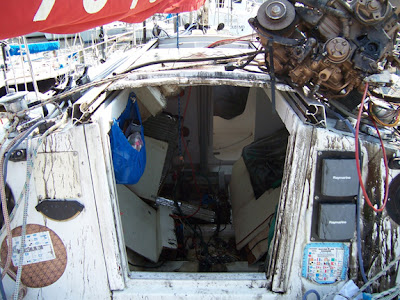 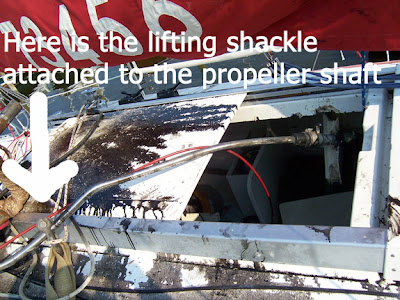 "On a day when the boatyard guys weren't around, the guy who owns this boat tried to launch it himself. Apparently the boat does have a deadeye in the keel for lifting, but the owner didn't catch on and attached the lifting sling to the shaft, just above the deadeye. Ripping out the engine is messy business, and this incident is further evidence that despite the lifting sling and the engine shaft being adjacent to each other, close still only counts in horseshoes and hand grenades. "
Posted by Litoralis at 8:58 AM 2 comments: Links to this post

Howtoons -- the comic strip for kids that explains how to build cool stuff -- has just launched on the Web. The artwork is great and the projects are interesting. While perusing the site, I came across this great cartoon that illustrates wind strengths on the Beaufort scale. When I was sailing Optimists as a kid in England we used to refer to wind strength using the Beaufort scale instead of using knots. No one seems to use it in the US, but I always liked it because it is based on observations which are easy to differentiate, rather than wind speeds which are hard to judge. For example, the difference between a Force 3 and a Force 4 is that white caps have started to form. 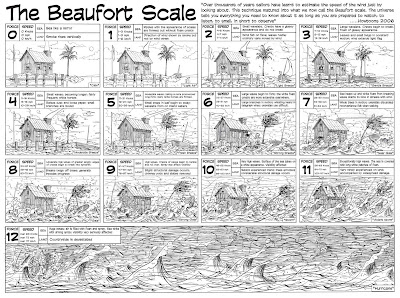 Some amazing pictures of what happened when the shoreline north of Sydney was transformed into an enormous bubble bath after foam churned up by powerful currents and then tossed by waves appeared on the beach. 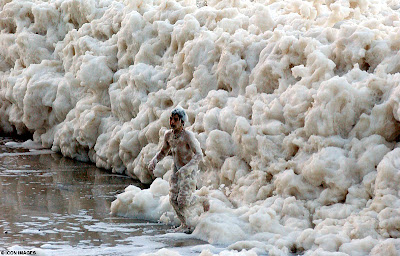 From the Daily Mail:

Foam swallowed an entire beach and half the nearby buildings, including the local lifeguards’ centre, in a freak display of nature at Yamba in New South Wales. One minute a group of teenage surfers were waiting to catch a wave, the next they were swallowed up in a giant bubble bath. The foam was so light that they could puff it out of their hands and watch it float away. 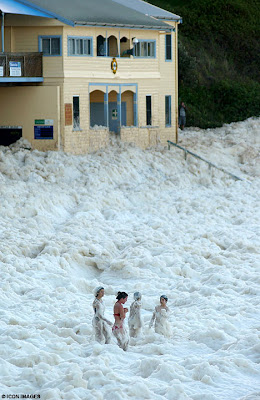 The foam is created by impurities in the ocean, such as salts, chemicals, dead plants, decomposed fish and excretions from seaweed.

All are churned up together by powerful currents which cause the water to form bubbles.

These bubbles stick to each other as they are carried below the surface by the current towards the shore.

As a wave starts to form on the surface, the motion of the water causes the bubbles to swirl upwards and, massed together, they become foam.

The foam "surfs" towards shore until the wave "crashes", tossing the foam into the air. 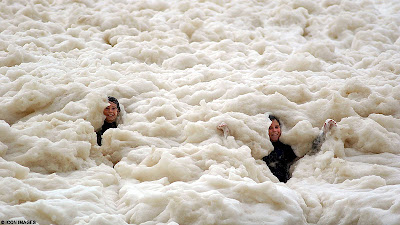 Posted by Litoralis at 9:11 AM 3 comments: Links to this post 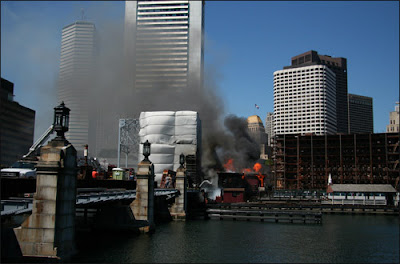 For the second time since I have been living and working in Boston, the Boston Tea Party Museum is on fire. Boston tourists will remember this as the museum where visitors could reenact important historical tax evasion by throwing fake bundles of tea into the harbor (actually the Fort Point Channel). After a fire in August of 2001 caused by a lightning strike did great damage to the site, the entire site was demolished, and a new interpretive facility was under construction in its place.

The original Tea Party Museum opened in 1973 and included a replica of the Brig Beaver, one of three ships raided by colonists in an act of defiance that helped sparked the American Revolution. The Beaver was hauled out of the water in 2004 and taken to the Gloucester Maritime Heritage Center for what was described at the time as a $300,000 reconstruction.

The current renovation was supposed to double the size of the museum, which is owned by Historic Tours of America based in Key West, Fla. The plans called for the addition of replicas of the Dartmouth and the Eleanor, the two other tall ships raided by colonists in 1773. 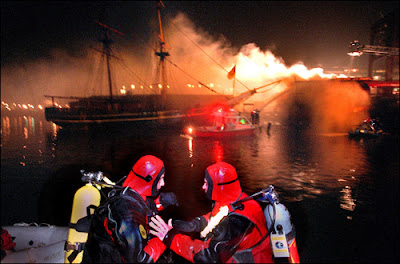 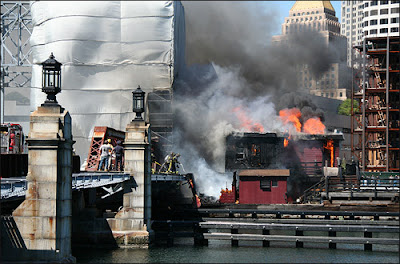 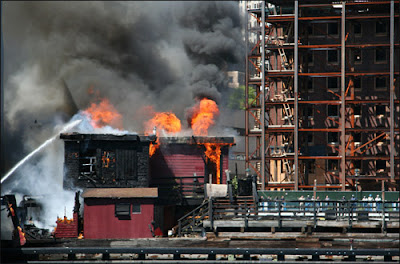 Posted by Litoralis at 1:45 PM 3 comments: Links to this post

An "artist" in Germany named Frank Boelter has built a boat of the that 'Tetrapack' stuff that they use to make milk cartons. 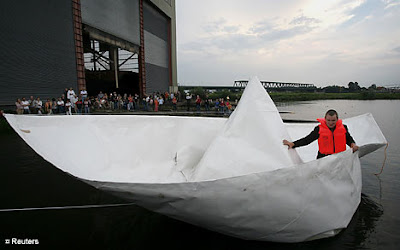 He "came up with the idea one breakfast time, while he was sitting at his kitchen table fiddling with an empty milk carton, which he cut up and made into a scaled-down model."

The boat is 30 feet long, weighs 55 pounds, uses a 170-square-metre piece of Tetrapack paper, and took only two hours to construct. The "artist" said it will survive forty days before it disintegrates into a wet, sinking mass.

It is part of his exhibition named 'Bis ans Ende der Welt' (Until the end of the world). 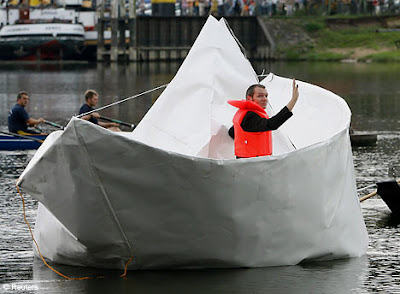 Posted by Litoralis at 8:37 AM No comments: Links to this post 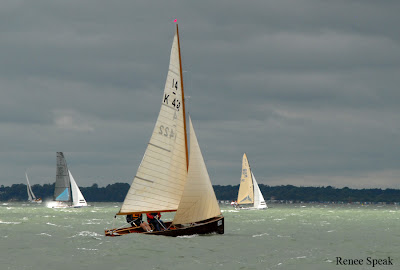 12 Meters in the Fog

On the return trip from Block Island today there were two 12 meters sailing upwind in the heavy fog. One was US-22 (Intrepid) and the other was US-18 (Easterner). 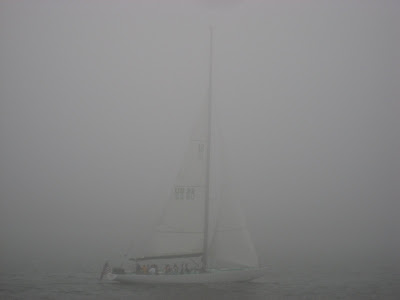 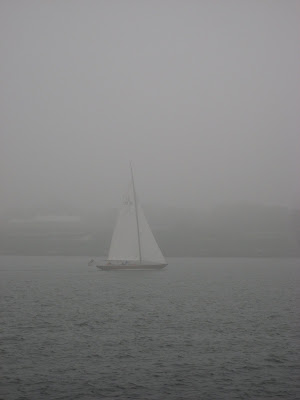 US-18 Easterner
Posted by Litoralis at 8:40 PM No comments: Links to this post

I can see your keel! 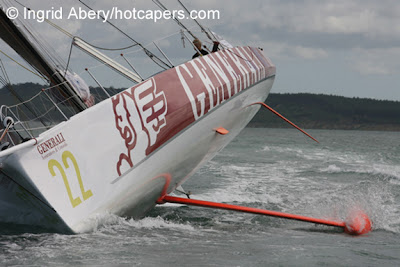 I know canting keels are supposed to increase righting moment and all that...but does the leeward daggerboard really provide all the lateral resistance these boats need?
Posted by Litoralis at 10:22 PM No comments: Links to this post

Watch out Bonnie, there might be big propellers under the water in the East River. 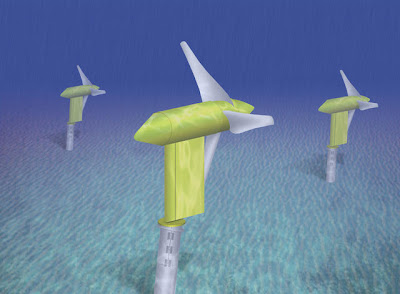 A company that seems to have some trouble designing cast aluminum turbine blades has installed a small number of test turbines in the East River. The currents are so strong that several of the turbine propellers have been sheared off a third of the way down, and stronger replacements were hampered by insufficiently strong bolt connections to the turbine hubs. The East River is not actually a river; it's a tidal strait, and one can easily observe the current moving in opposite directions with the tides. The plan is to install a field of turbines anchored to the bottom of the East River and use the currents to generate electricity for the city.

It is worrying when the founder of the company, Trey Taylor, thinks that: "The only way for us to learn is to get the turbines into the water and start breaking them." The trial turbines — five generating electricity and one housing the dynamometer that measures water rotational speed — have been installed on the bottom of a narrow strip of the river’s eastern channel. 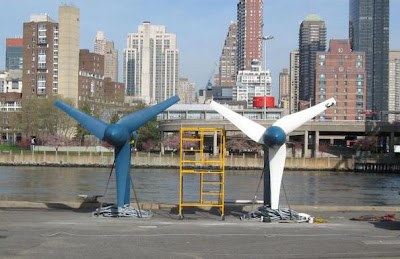 Posted by Litoralis at 7:29 PM 5 comments: Links to this post

That's a lot of Optimists! 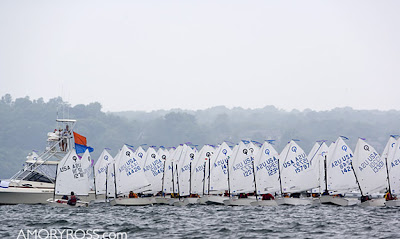 The Optimist New England Championships were held this week in Newport. One thing I noticed immediately was the sail numbers. When I was sailing Optimists, my sail number had four digits...now they are up to five! 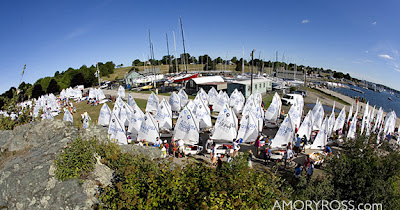 There were so many boats that the organizers had to launch the boats in flights (as indicated by this special notice from the regatta webpage).

SPECIAL NOTICE:
Sailors Must not leave the spot to which they are currently parked until beach launch is signaled. To control the access to the beach, optis will be called by FLIGHTS. Do not leave until we tell you by bullhorn to get in line for the beach.

There were also quite a few Mommy boats on the water; they even had to register with the race committee (notice the numbered flags on the sterns of the Mommy boats). 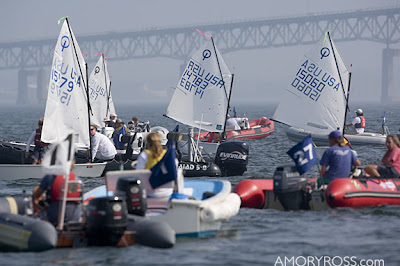 Posted by Litoralis at 10:19 AM 2 comments: Links to this post

Another Use for Duct Tape!

As a sailor and skier, I have used duct tape for many things including the occasional repair of actual ducts (for which it is not actually very good). Just this past weekend I used it to stop my boom from falling off the gooseneck, and to stop my broken inspection port from leaking. I also had a duct tape wallet for a few years. Now it turns out that researchers have proven that duct tape is more effective than cryotherapy for warts.

In patients treated with duct tape, 85 percent of the warts completely resolved, compared with 60 percent in the cryotherapy group. These results were statistically significant. Resolution of warts treated with duct tape usually occurred within the first 28 days of therapy. If there was no response within the first two weeks, the warts were unlikely to respond to a longer course of therapy. The main adverse outcomes with duct-tape therapy were difficulty keeping the tape on the wart and minor skin irritation. The main adverse effect in the cryotherapy group was mild to severe pain at the freeze site during and after the treatment.

Posted by Litoralis at 11:53 AM 2 comments: Links to this post

The story is that "control problems" caused this: