Avid readers (are there any?) of this blog will have noticed that I have not actually gone sailing since I started writing last fall. Well, yesterday I finally hooked up the new trailer to the car: 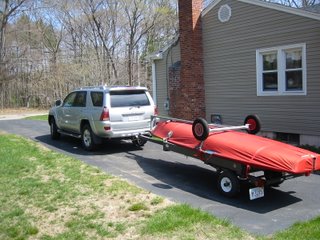 And went over to Lake Massapoag: 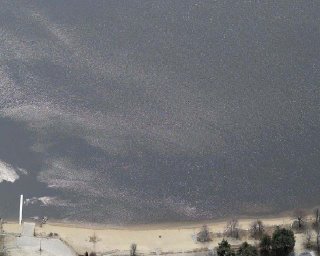 I launched the boat from the boat ramp in the photo above. The wind was a shifty and variable northeasterly. While I was rigging, the local high school sailing coach Bob showed up. He had noticed my sail and decided to see who the crazy sailor was. He invited me to come along to the Thursday night Laser racing and also the Sunday handicap racing. So now I can race on a lake within 10 minutes of my house.

Oh, and here is a photo of the LiveSailDie sticker on the back of my trailer for OG. 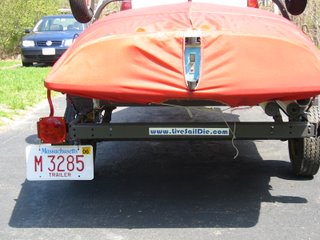 Posted by Litoralis at 12:53 PM 7 comments: Links to this post

Interesting Story from the Horse's Mouth

I came across this interesting story from Joe Rouse at The Horse's Mouth:

Last Thursday we were doing the California Bash up from San Diego
approximately 10nm off Carmel. While monitoring ch. 16 I heard a
vessel doing long counts to ten for a USCG helicopter. The skipper
was saying, "ONE...TWO...THREE…" etc. They repeated this three
times over the course of about 20 minutes. I figured that the helo
was trying to home in on their location using RDF. This sounded
like some kind of emergency so I stayed tuned.

After a few more minutes I discovered that the sailing vessel
Celcion (Celcion is Latin for "are we there yet") was lost and that
the helo was on its way to lend assistance. Upon finding the
desperately lost voyager the helo then hovered overhead in order to
provide the adventurous captain with his lat/long position. The
coordinates were repeated several times due to mis-something. The
skipper then asked where he was. The USCG helo said "you're six
miles from Monterey." The skipper mumbled something about wanting
to go to Half Moon Bay and "could you point me in the right
direction, and I think I have a "map" of Monterey someplace". The
helo pilot was not about to give this guy directions, and wisely
so. He strongly urged the captain to seek an escort into Monterey
for the evening (sunset was another two hours away). The skipper
accepted even though he was a wee bit embarrassed at this point.

The pilot contacted USCG Monterey and requested a rescue boat be
dispatched to the scene. I being only about 8nm away also offered
my assistance. The pilot asked if we could steam towards Celcion's
position and act as another asset if needed. We agreed to do what
we could.

About 45 minutes later the USCG rescue boat arrived. We were now
3nm away from Celcion. Communication between the coasties and the
skipper were a little confused. The coasties asked several times if
he or his crew had suffered any injuries. The skipper finally
understood and said "Only my pride". Eventually the coasties
escorted this rather fortunate skipper and his crew into Monterey
for the evening while we went back to bashing up the coast.

"It appears that the skipper of the Celcion left SF Bay for a trip to
Half Moon Bay and wound up near Monterey totally lost and confused.
I wonder if this is how Gilligan's Island started?

1.5 Hours of USCG Helicopter flight time = $20,000
3 Hours of USCG rescue boat time = $5,000
Spending an unexpected weekend in Monterey with the help of US
taxpayers and the Coast Guard = PRICELESS"

What I don't get is why the bill for Coast Guard service in frivolous situations like this is not sent along to the owner or operator of the vessel in trouble. When skiers get themselves in similar situations they are often billed for the cost of their rescue, even in the US. A quick Google search yielded an example from from Vermont where each of the four skiers involved was assessed $4,177.87 to cover the cost of the rescue from the woods near Killington. For ski vacations in Europe, travellers can take out insurance to cover the high cost of a potential rescue.
Why should taxpayers cover the cost of the mistakes of an inexperienced sailor in a similar situation?

Posted by Litoralis at 9:15 PM 2 comments: Links to this post

One of the local sailors I sailed against as a junior did very well at the Sunfish Midwinter Championship. He was always the young hotshot on our local lake and has apparently learned alot from sailing Lasers with Tillerman in Connecticut.
The Sunfish is a strange little boat but it has a very loyal following among what is now becoming an older group of sailors. Unfortunately there is not much respect to be had when boasting of success in a Sunfish among sailors from other classes. When you tell someone that you raced Sunfish when you were growing up, the image in their mind is more likely to be: 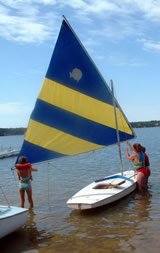 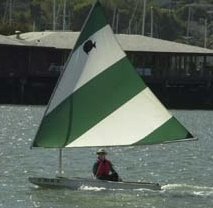 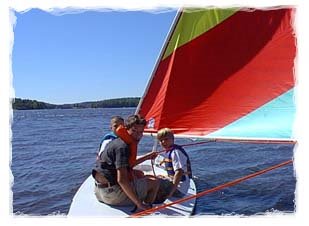 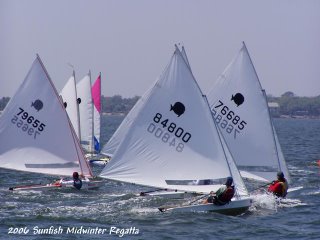 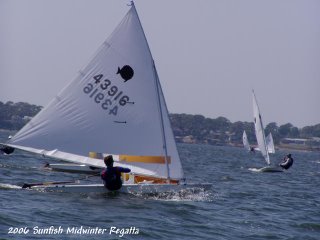 Despite its cheesy reputation, the Sunfish is an interesting and tricky boat to sail. The sailplan is different on port and starboard tacks because the sail is rigged on the port side of the mast, the whole rig is very wobbly and can easily be shaken by aggressive body motions, the hull has hard chines and in some conditions sails well when heeled to leeward so that only one chine is in the water, and the sail controls are rudimentry and not very effective.
Interestingly, when I started sailing a Star there were some parallels between the two boats. The main similarity is that the boom on both boats is very long and low to the deck which makes tacking interesting and allows for a kind of aerodynamic "plate" effect at the bottom of the main. And the other is that the rudder on both boats is relatively small and can stall out easily.
Posted by Litoralis at 2:26 PM 5 comments: Links to this post

My post on wind shadows sparked off a stream of comments from Tillerman. At first I thought he was trying to trick me into saying something incorrect, but it seems he was just trying to figure it out for himself.
Tillerman said...

Wind indicators point to windward, but they are affected by apparent wind, so a more accurate description would be that you are potentially in someone's wind shadow when you are on the imaginary line drawn straight downwind from the windward boat's sail plan.

I think it is straight downwind. I visualize wind shadows as holes in the wind that extend downwind from the sail plan of the boat.

Straight downwind. The wind shadow is not shifted by the movement of the boat in my mental model.

If you imagine a fast boat like a catamaran sailing on a broad reach (with respect to the true wind direction) but with the sails trimmed in to his apparent wind direction. The wind shadow of the catamaran must still extend downwind. If it extends along the apparent wind angle then it would extend upwind. There will be a region of turbulent air following the path of the boat, but this is turbulence, not a wind shadow.

Also, imagine a large powerboat moving quickly in a direction perpendicular to the true wind direction. It will still have a wind shadow extending downwind from its beam even though the apparent wind angle on the boat is the same as its direction of travel.

Good points. So is Dellenbaugh talking out of his yahoo in saying that the wind indicator gives you a "very accurate idea of which way the boat's wind shadow extends"?

The wind indicator method suggested by Dellenbaugh is a good simplification for downwind sailing in slowish boats.

What does everyone else think? How do you visualize wind shadows? Am I correct about wind shadows extending directly downwind?
Posted by Litoralis at 12:58 PM 6 comments: Links to this post 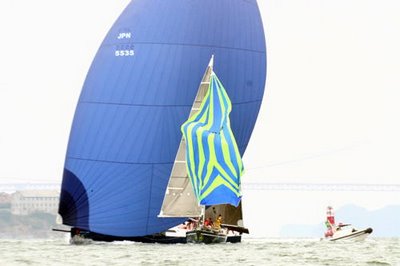 (Following is a brief excerpt of a story by David Dellenbaugh posted on the Sailing Breezes online magazine.) Wind shadows, like the wind itself, are invisible, so you have to look around for clues in order to know where they are. Your best tool is undoubtedly the wind indicator on top of your mast (or on the mast of a boat to windward). This pennant shows the apparent wind direction and will give you a very accurate idea of which way the boat's wind shadow extends. In addition to determining the angle of the wind shadow, it's important to know its size. There are many factors that affect how large an area is covered by a boat's disturbed air. These include the wind velocity, height of the mast and speed of the boat. The length of a wind shadow is often measured in "mast-height" units rather than in boatlengths. For example, in heavy air a boat's wind shadow might extend four mast-heights to leeward. In light air, that same boat might cast a wind shadow for eight or more mast-heights. ... - David Dellenbaugh
Posted by Litoralis at 11:25 AM 10 comments: Links to this post