Thanks to Hold Fast for pointing me to another boat I'd like to sail. I have previously posted about the RS700 and the Musto Skiff which are commercially made fiberglass skiffs. The Swift Solo is an S-glass / carbon Kevlar construction with a cedar core (instead of foam) and carbon spars. It has a self tacking / self sheeting jib and a self launching spinnaker and pole. The boat can be made as a kit and the results are beautiful. 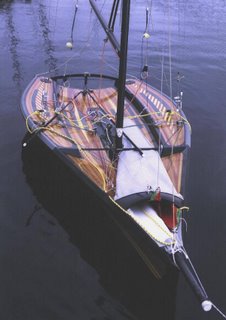 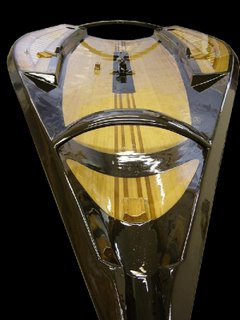 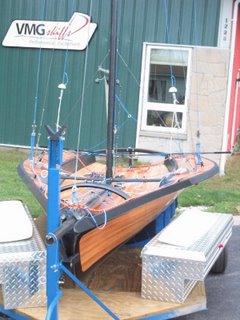 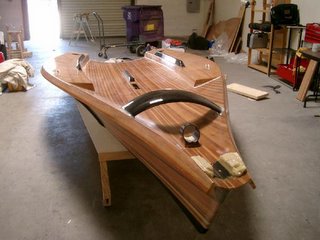 Comparison to the RS700 and Musto Skiff 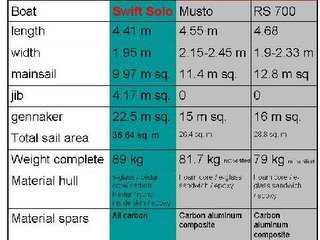 Note: there are some errors in the above chart. the spars for the Musto
are all carbon, the racks are not adjustable, and the sail area is slightly off.


The unusual thing about the Swift Solo is that it has a jib. Julian Bethwaite comments on this on the class webpage:
"Having a jib on a single-hander combined with the main/jib sheeting system keeps the boat balanced across a wide wind range; it also has excellent windward performance. It needs a softer mast to take full advantage of the sheeting feature, but even as it is rigged now, when bearing away in a puff the boat responds immediately and impressively! Most single-handers can't respond like this.

A second advantage to sloop-rigging is that it lowers the rig plan compared with cat-rigging. This allows the 24 1/2 er to perform well without wings because the rig aspect is more moderate (compared with a boat having racks and a cat rig setup) therefore the boat is easier to sail through gust/lull wind variations. You won't get dumped in the water when the wind drops and it is easier to respond to sudden wind changes. The moderate sail plan has low drag and goes upwind surprisingly fast. I easily stayed in front of a 5o5 going to weather.

The spinnaker is big-possibly too big-but it works and is very manageable. It is possible to sail low and fast downwind.

Some other pluses:
1. Gunwale angles set up well so no need for foot loops.
2. Very positive steering
3. High boom so easy to tack
4. Main sheet, effectively 1:1 so easy and simple trim
5. Great feeling going upwind
6. Feels comfortable to get low on the wire.
7. No vices in bearing away.

Some minuses:
1. Hull a bit full 3ft back from bow
2. Top of mast too stiff
3. Main sheet is stiff
4. Footrails not high enough


In conclusion, this is a very good design! This boat would be great for sailing by yourself whenever you want. It gives good skiff feel and would teach great boat handling." - Julian Bethwaite

I think the Swift Solo would be a fun boat to sail but I'm not sure that I could build it myself; although I am an engineer by training I have never built anything like this. I do have a section of basement that is wired as a large home workshop but I have none of the tools. I bet my brother, who is really an engineer and has composites experience, could help me build one though. The boat looks like quite a complicated beast to sail, but it goes fast and there are boats in the US and Canada. 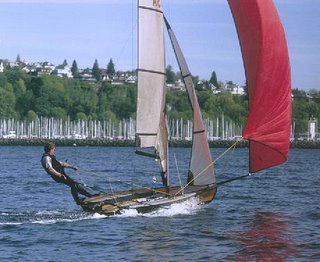 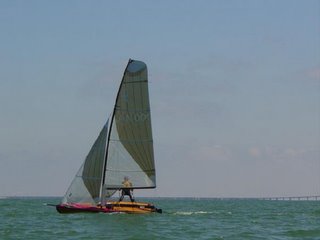 Posted by Litoralis at 12:14 PM 6 comments: Links to this post

Another Day at the Office for the Hugo Boss Team 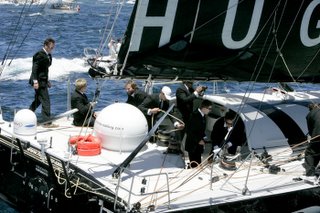 The Hugo Boss team started the Sydney-Hobart Race wearing black suits. Not bad...although I wonder if Sherry Fowler thinks it's appropriate. They'll need to switch to foul weather gear when they push the boat like Alex Thompson has in the past. 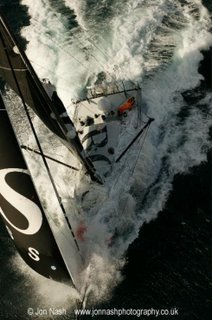 Posted by Litoralis at 8:50 PM No comments: Links to this post

To follow up on my earlier post about the CBI Wind website, here's a link to the CBI Cam. There's not much to see right now because the river is frozen and the camera looks like it is not doing too well in the cold weather.

Posted by Litoralis at 3:16 PM No comments: Links to this post

Tillerman posted about a sailing regatta in San Francisco that he found using Google Earth.
I thought I'd post some images for people who don't have the Google Earth software.

Maybe someone (are you out there EVK4?) can identify the regatta and the type of boat.
Posted by Litoralis at 9:17 AM 2 comments: Links to this post

I became aware of the CBI Wind website while sailing in college. It was a great resource for figuring out the latest wind conditions on the Charles River. The site is maintained by Eric Wile who is an MIT alumnus who works in the Lincoln lab. He also wrote a program that solves those annoying Sudoku puzzles.

The wind on the Charles is tricky to say the least, although there was a definite advantage when sailing home regattas on the river. 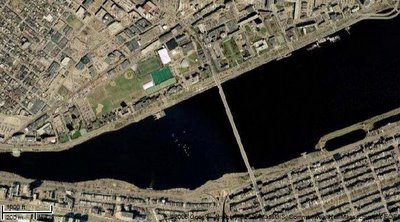 The most consistent wind direction was a westerly (coming down the river basin) and the most shifty was a southerly (over Boston's Back Bay). There would also be a big hole extending part of the way across the river in a northerly caused by MIT's Green Building.

An interesting side note - the Google Map satellite photo of the Charles shows the BU team on the river during a practice: 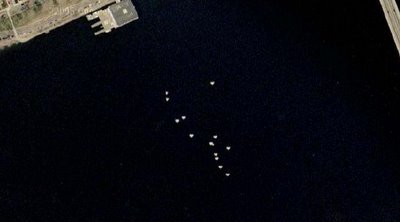 And also the storm drain outlet that is underneath BU's rotation dock: 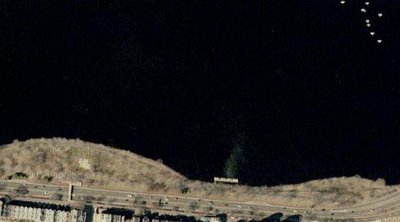 The Charles River is actually remarkably clean, despite the horror stories you may have heard about it. The Charles River Watershed Association checks the water quality and it is often safe enough for swimming. For example, in June and July of 2005 the river basin (top right) had less than the allowed 126 colony forming units of e. coli per 100 milliliters of water (safe for swimming):

It snowed this morning which always makes me feel happy. Snow makes the world look clean and neat, at least for a little while. Usually I would have given in to the urge to spend some time outside, but today I settled for shoveling the driveway and going to get a haircut. With my one week old daughter E. to take care of and law school finals looming I had good reason to stay inside.
So I made a fire, sat on my couch, put my feet up, and read about Professional Responsibility. The afternoon would have been more satisfying if I had been reading something meatier like Property or Constitutional Law, but as the Stones say, "You can't always get what you want, but if you try sometimes, well you just might find, you get what you need." Being able to take a break from studying to soothe E. to sleep was just what I needed to make this afternoon pretty great.
Posted by Litoralis at 4:52 PM No comments: Links to this post