I Heard I Was In Town

Now that I am back from the land of milk and honey that is Tillerman's house and back in Massachusetts I guess I should write a post about the weekend. The drive down was fairly uneventful, which is good because it was the first long highway trip for the new trailer and the first long trip with Tillerman's "cutest grandaughter in the world".

OG, I wonder if you will see an increase in hits on LiveSailDie.com after the prominent display of my sticker on the back of the trailer all the way down I-95 from Massachusetts to New Jersey.

We did get pulled over in Connecticut on the Merritt Parkway because apparently trailers are not allowed on that road despite there being no signage to that effect and even though Tillerman has driven it several times with his trailer with no problems.

On Sunday morning, Tillerman and I drove down to Spruce Run for the regatta. It was hot and there was no wind, but I was happy to be at an actual regatta again. As the cast of characters gradually showed up I actually recognized some of them from Tillerman's post. Since sailing in Laser regattas on the Jersey Shore with Tillerman when I was in high school, I have tried to avoid him when he tries to tell me who the hotshots are...I didn't want to be intimidated by knowing that: "that guy won the North Americans a few years ago" or "he is doing an Olympic campaign". It was usually pretty obvious who you didn't want to try to beat off the start line and who would be an easy target. The "Collander Cup" (as it is now known) was nothing like those Jersey Shore regattas. It was more like sailing Sunfish on my old home lake; the guys to watch were the old retirees and the local hotshots who had the local knowledge.

I made sure I was the first boat to launch and commenced drifting out to the start line. I felt really clumsy in the boat and tried to do some roll tacks to get used to the feel of a Laser again. Eventually the rest of the fleet made it out to the line and after some course adjustments the committee started the first race. There was no wind at the start but it filled in at the pin end leaving Tillerman, Local Hotshot and me at the boat end watching the Kid and the rest of the fleet ghosting along. By the windward mark I was buried at mid-fleet with little hope of catching up on the downwind in a drifter. Just as we rounded the leeward mark, a breath of breeze appeared...and the fleet started to make mistakes. My cardinal rule in conditions like this is POINT AT THE MARK, so I just stayed on the lifted tack and gained three boats on the last beat to finish third.

The rest of the morning was more of the same drifting conditions with almost no opportunities to make strategic gains except at the start and at mark roundings. Tillerman was leading the third race at the windward mark in absolutely no breeze when the race committee drove around in their skiff to take a vote on whether to abandon the race. No decision was made though, the wind filled in nicely and Tillerman finished in second. Despite the best wind of the day, the race committee sent us in for lunch; hot dogs courtesy of the Jet 14 fleet.

By the time we had finished lunch the wind had died again, so I headed back out to the course by standing on the bow and rocking the boat with the rudder flipped up. As Tillerman pointed out, I fell off the bow while circling around the committee boat waiting for the rest of the fleet to arrive...I can't wait to see the photo taken by the fleet webmaster. The afternoon conditions were more drifty than the morning but somehow I managed to find myself first at the windward mark twice...Local Hotshot was too good for me though and he beat me in both races. I managed to fall/slide off the boat again while sailing downwind...upon reflection my shiny boardshorts were probably not the best attire for Laser sailing.

I had low expectations for the regatta considering it was my first Laser regatta in 9 years, that I am easily 45 lbs overweight for Laser sailing, and that the conditions were so light but after everything was done I was somehow in 2nd place overall. Not bad...maybe I did learn something from all that college sailing that I managed not to forget since then. I have plans to attend some more competitive regattas this summer as well as my usual Star sailing. Hopefully the rest of the regattas will be as enjoyable as the "Collander Cup".
Posted by Litoralis at 12:50 PM 3 comments: Links to this post

I was surfing the web and came across an artist whose work looked familiar for some reason. His name is James Niehues and he is the artist who painted the images for the trail maps of many of my favorite ski areas. I had always been curious why the trail maps for many ski areas looked so similar and had guessed that perhaps they were computer generated. It turns out that the reason they look similar is because the same artist painted them all. He also does artwork for other resorts including this image of Peter Island in the BVI: 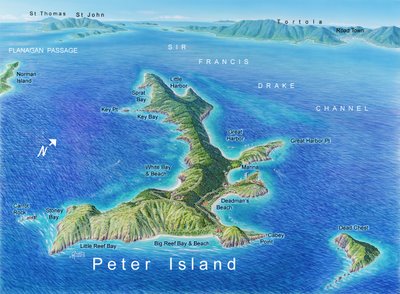 Posted by Litoralis at 2:00 PM 5 comments: Links to this post

A Quote from OG

To quote one of my online sailing friends, OG from LiveSailDie: (this was written on Friday May 12th and was probably originally intended for some other purpose, however it seems perfect for this situation...)

To feel the wind in your hair and the salt on your face is one of the most exhilarating experiences one could ever be succumbed to. Sailing into the sunset with the horizon your destination truly provides a sense of living. When no one else can be seen, no land, birds or passing ships, you know you are experiencing one of the many wonders the sea and the world has to offer…

Sadly, not everyone can enjoy this natural pleasure…

It has been a rough few months of horrible experiences, and just again today, additional bad news was cast my way. More tears fell from eyes that once glistened in the day and moonlight and the statement “if only” again passed through my mind.

Life is too short to stay dry…

Life is too short to stay grounded…

Life is too short to stay on your island so please sail the waters in and surrounding your land.

Talk of times on the water, and share with land dweller the joy of the sea. Pass on wisdom of the winds and stories of knowledge of nautical ways…

So please… Live each day… Sail the Seas… Then, and only then, should you rest your head and Die…

Posted by Litoralis at 12:59 AM 2 comments: Links to this post 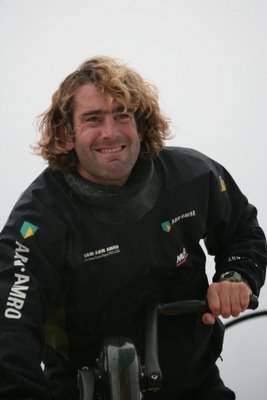 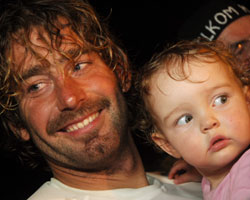 I suppose as armchair and internet sailors we had become used to these boats sailing around the world at incredible speeds with no casualties. Given a few changes in my own sailing history I might have been in Hans' place. Perhaps my summer job with Young America could have become more than it was...maybe if I had taken that job in Maine as a sailing coach and sailmaker...I might have had the opportunity to sail in the Volvo Ocean Race. 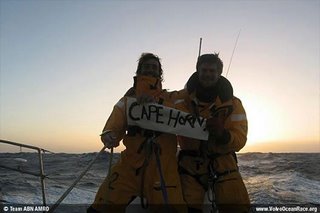 Although Hans' tragic death makes me feel thankful for my safe life here in Massachusetts, where the most dangerous thing I deal with is the traffic on I-95 on the way to work, I am still envious of his courage in pursuing his dream. 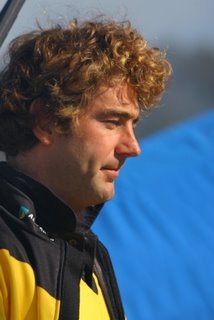 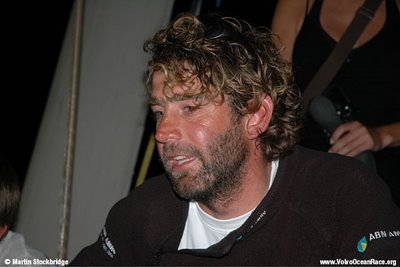 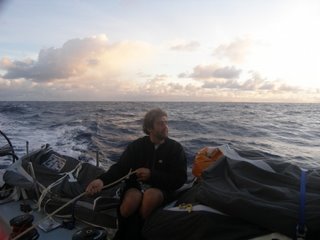 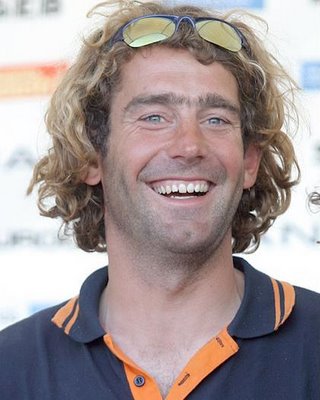 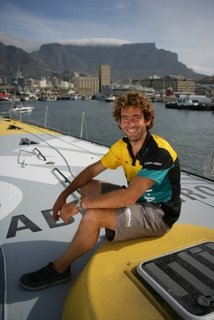 It's tough when someone so young loses their life...but at least we can take comfort in the fact that Hans was chasing his dream. 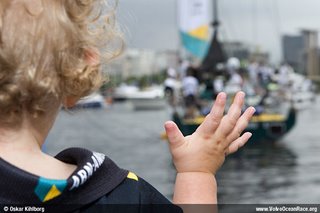 Posted by Litoralis at 11:17 PM 5 comments: Links to this post

With deep regret ABN AMRO confirms that Hans Horrevoets, crew member of ABN AMRO TWO, was killed in an accident as the boat made its way to Portsmouth. Hans was swept overboard early this morning, as his boat battled its way through five metre seas and 30 knot winds. The boat was about 2,000 kilometres from land. His fellow crew members immediately turned around and began to search for him, meanwhile raising the alarm on shore. In the most difficult of conditions, they succeeded in finding Hans. He was lifted back on board, and attempts were made to resuscitate him – but these were not successful.

Rijkman Groenink, Chairman of the Managing Board of ABN AMRO, said: "We are all devastated by this terrible accident. Over the past year and a half, from preparation to where we are now, the crew members of TEAM ABN AMRO have become an integral part of the ABN AMRO family. We shared in the excitement leading up to the race and celebrated our achievements since the race began. Now, in this tragic moment, our thoughts are with Hans' family, and also with his fellow crew members."

The crew is no longer in racing mode and is making its way to land as quickly as possible. A decision on further participation of ABN AMRO TWO in the race will be made during the Portsmouth stopover.

Posted by Litoralis at 9:45 PM 3 comments: Links to this post

Do you you think it is too early to teach her that she can only pump once per wave?
Posted by Litoralis at 10:35 PM 3 comments: Links to this post

Check the bottom of your rum!

BUDAPEST (Reuters) - Hungarian builders who drank their way to the bottom of a huge barrel of rum while renovating a house got a nasty surprise when a pickled corpse tumbled out of the empty barrel, a police magazine website reported.

According to online magazine www.zsaru.hu, workers in Szeged in the south of Hungary tried to move the barrel after they had drained it, only to find it was surprisingly heavy and were shocked when the body of a naked man fell out.The website said that the body of the man had been shipped back from Jamaica 20 years ago by his wife in the barrel of rum in order to avoid the cost and paperwork of an official return.

According to the website, workers said the rum in the 300-litre barrel had a "special taste" so they even decanted a few bottles of the liquor to take home.

The wife has since died and the man was buried in a proper grave.
Posted by Litoralis at 8:56 PM 4 comments: Links to this post